History of the Bastion, far more than just a Holiday house in Gascony

Before becoming this charming and welcoming holiday house in Gascony, the Bastion du Prince Noir is a historical site.

A former outpost located within the second wall of the Château de Poudenas, it was used in 1369 as a fortified camp by Edward of Woodstock, the Black Prince.

The Château was built in the 13th century by the lords of Podenas, vassals of Edward I Plantagenet, Duke of Aquitaine and King of England, in order to défend the Gélise valley.

Born in 1330, Edward of Woodstock, nicknamed the Black Prince was the eldest son of Edward III King of England.

This nickname, not used by his contemporaries, was given because of the colour of his armour. This he wore from1346 having led a bloody punitive night expedition against wounded French soldiers who had nearly cost him in life during the battle earlier in the day.

This was against the spirit of chivalry and the Prince felt great shame in front of his father the King, he henceforth took to wearing a black armoura.

From 1355, he was named lieutenant for Gascony in the middle of the Hundred Years War and led a campaign throughout South West France, raiding the counties of Juillac, Armagnac et Astarac, perpetrating great massacres and sacking Carcassonne, Narbonne et Castelnaudary. This gave him a reputation as a feared war strategist.

In 1360, the Treaty of Brétigny-Calais granted Edward III more land in addition to his traditional Duchy of Aquitaine. These lands constitutes an autonomous principality that the Black Prince governed locally until his father Edward III’s abdication on the 5th of October 1372.

During the nearly 10 years that he spent in France, Edward of Woodstock had a string of other military successes such as the Battle of Najera in Spain won against the French led by du Guesclin in 1367. This success was jeopardised by the dethroned King of Castille, Pedro the Cruel, who refused to pay the costs of the expedition organised to support him.

Upon his return in Aquitaine Edward of Woodstock ordered the raising of a fouage (a tax levied on every household) in order to replenish his finances. However, the comte d’Armagnac, Johan I, refused together with the Gascony barons gascons and sought support from the King of France, Charles V, which resulted in the cancellation of the peace treaty of Brétigny-Calais. 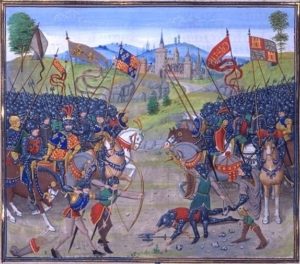 The Comte d’Armagnac got the Lord of on his side and supported the military offensives of Louis, Duke of Anjou and the King’s lieutenant for Languedoc ; this allowed them to reconquer the lands of Aquitaine.

Struck with dysentry during his Spanish expedition, the Black Prince could not counter the French-led offensives. It is during this period that he besieged the Château de Poudenas, and took over what was at the time the old bastion of the Château.

He left for England in 1371, leaving Aquitaine in the care of his brother John of Gaunt, Duke of Lancaster. He brought with him his very young son, Richard, born in Bordeaux in 1367 and who became King of England Richard II sometimes nicknamed « of Bordeaux », or « the Gascon ».

The prince died of disease in 1376, one year before his father Edward III. He is buried in Canterbury Cathedral in Kent, where one can still admire his famous and magnificent effigy on his tomb.